Plant a tree in memory of Anna
An environmentally-friendly option 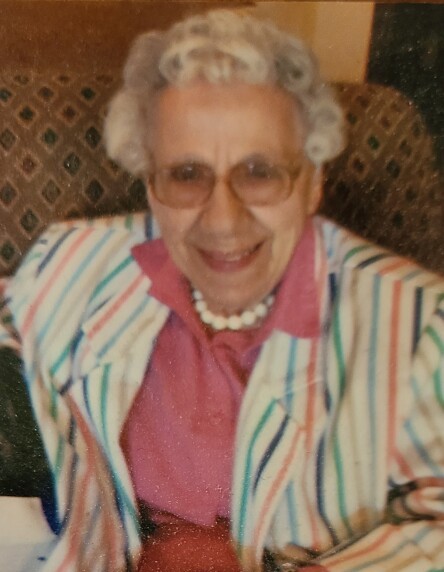 Mt. Morris, IL, Anna Alex Hatzipanagiotis, age 97, passed away on Thursday March 25, 2021 in Pinecrest Manor Nursing Home, Mt. Morris, IL.  She was born on September 6, 1923 in Lawrence, New York, the daughter of Eleni and Pascal Alex.  Anna was educated in the New York Schools.  She attended Pace College, Hunter University, NYC, and she graduated from Gregg College for court reporting and was a certified shorthand reporter in the states of New York, Iowa, and Illinois.

Anna worked in the New York City District Attorney’s Office and the USA Department of Labor, Unemployment Division, as a hearing reporter; via Civil Services Exams she became an Office Court Reporter in the Nassau County District Courts in 1948, the first woman certified in the District Courts, and also did free-lance work in NY including working at the United Nations.

She was married to Dr. P Hatzipanagiotis on June 22, 1958 at St. Paul’s Greek Orthodox Church, in Hempstead, NY.   After her marriage she worked in the Chicago Courts (Cochran Agency) 1958/59.  After 15 years as a homemaker, she returned to work at Polo Community High School for 3 years, Beier Company for 3 years as a secretary, worked as a quality control secretary at Born Warner, Dixon, IL for 14 years.  In 1992 she attended Sauk Valley College under the Displaced Worker Program and earned a certificate, 46 credit hours with 3.57 GPA in two semesters.  She worked as a part-time secretary for Orr & Reising Insurance, Mt. Morris since 1995.

She was a member of the Maids of Athens, Philoptohos in Hempstead, NY, secretary of the Long Island Little Symphony, secretary of the Hempstead Republican Club, member of the New York State Court Reporters Association and the National Shorthand Reporters Association for many years, avid traveler, studied the arts and her Greek heritage having done much research of Greek History and having traveled to Greece twice.

Anna is survived by her son: Christos Hatzipanagiotis, Mt. Morris, IL; and several nieces and nephews.

Anna is preceded in death by her parents; daughter: Eleni Hatzipanagiotis; brothers: Michael and Milton Alex; and sister: Smaro O’Neal.

In lieu of flowers memorials to Pinecreek Independent Church.

Plant a tree in memory of Anna by clicking here.
To send flowers to Anna's family, please visit our floral store.

A service summary is not available

Plant a tree in memory of Anna
An environmentally-friendly option

Plant a tree in memory of Anna

2 trees planted in memory of Anna

Chris, our thoughts and prayers go out to you in your time of grief.
may God grant you comfort and healing in these day, knowing she is with your sister and her husband in heaven. she was a wonderful, gracious lady. God bless. ---joyce and irvin toms.

I had the pleasure of getting to know your mother at Rock River Center. She will be greatly missed, you are in my thoughts and prayers.

Brother Chris know our prayers are with you. God bless you with peace and comfort.

What a wonderful,strong Christian. Her faith never was shaken. Our friendship and fellowship spanned more than 40 years and during more time than that she took shorthand notes of every service, song, testimonials, etc. we love and have missed you Sister Annie.

Annie as we called her at church one Loyal person always come to church, she wrote down everything that the minister said word for word, that was sister Annie, always had a smile from ear to ear, Another "TROPPER " in heaven,

Plant a tree in memory of Anna